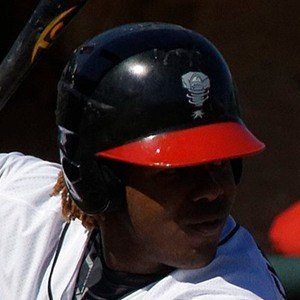 Third baseman who has risen to fame as a member of the Toronto Blue Jays organization. He was named the Blue Jays' top prospect in 2017, and was subsequently voted as the 3rd best prospect in all of the MLB in 2018.

He was named the top international free agent in 2015 by the MLB. He was signed by the Toronto Blue Jays that year, and debuted for the club in June 2015.

He was named to the World team during the 2017 All-Star Futures Game. He was subsequently named ESPN's Prospect of the Year following the 2017 season.

His father is MLB Hall of Famer Vladimir Guerrero. His uncle is Wilton Guerrero.

He and Rhys Hoskins both participated in the 2017 All-Star Futures Game.

Vladimir Guerrero Jr. Is A Member Of