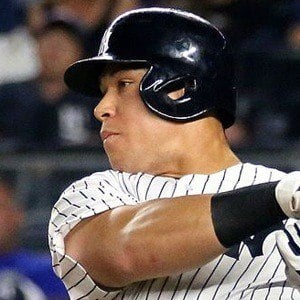 Outfielder for the New York Yankees who debuted with the team in 2016 after he was originally drafted 32nd overall by the organization in 2013. In 2017, he earned his first All-Star game nod, led the AL in home runs and won the AL Rookie of the Year award.

He played baseball, basketball and football for Linden High School and earned All-American honors as a senior in baseball. He was first drafted in 2010 by the Oakland Athletics in the 31st round, but chose to enroll in college at California State University, Fresno.

He and his older brother John were both adopted by parents Patty and Wayne Judge. Both his parents were teachers.

He passed Babe Ruth to set the Yankees single-season franchise home record with his 52nd home run in 2017.

Aaron Judge Is A Member Of