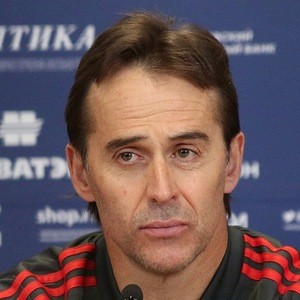 Former professional football player known for his work with both Real Madrid and Spain's national team as a goalkeeper. He later became known for being an assistant to Spain's head coach as well as for being the head coach of Real Madrid.

He has earned several honors as both a player and manager. He was runner-up of the 1985 FIFA World Youth Championships as goalkeeper for Spain's Under 20 national team. As a manager, he won the UEFA European Under 21 Championship during their 2013 season.

He was born and raised in Asteasu, Spain.

He was replaced by Fernando Hierro as coach of Spain's national team to fulfill a three-year contract with Real Madrid.

Julen Lopetegui Is A Member Of