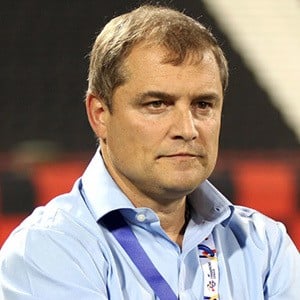 Soccer manager who has gained acclaim for his coaching in Brazil's Serie A, including for Sport Club Internacional and São Paulo. He was a prolific forward during the 1980's and 1990's, and helped Peñarol win the Copa Libertadores in 1987.

He played his youth soccer for Liverpool Montevideo between 1982-1983. He debuted professionally with the club's senior team in 1983.

He returned to Peñarol as a manager, and helped the club win the Uruguayan Primera Division in 2003, 2009, and 2010. He led Internacional to the Campeonato Gaucho title in 2015.

He was originally born and raised in Montevideo, Uruguay.

He has coached Rodrigo Caio for São Paulo FC.

Diego Aguirre Is A Member Of