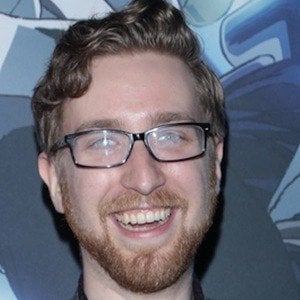 Voice actor who has risen to fame for his career dubbing Japanese anime TV and film for Funimation. Some of his most notable roles have been Mikaela in the series Seraph of the End and Izuku in My Hero Academia.

He studied theater at the University of North Texas. He would break into the voice acting industry prior to his graduation.

He dubbed the character Edward in the 2017 Japanese anime film Black Butler: Book of the Atlantic. He has also voiced the announcer role in the 2018 Dragon Ball FighterZ and 2020 Dragon Ball Z: Kakarot video games.

He was originally born and raised in Maryland. He has a younger sister named Hayley.

He and Christopher Sabat appeared together on panels at San Diego Comic-Con for their work dubbing My Hero Academia.

Justin Briner Is A Member Of