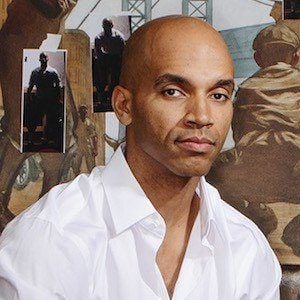 Known for his African-American history and culture-themed work, Nelson illustrated the Caldecott Honor-winning book Moses: When Harriet Tubman Led Her People to Freedom and received a 2001 NAACP Image Award for his artwork for Will Smith's publication Just the Two of Us.

Early in his career, he illustrated author Debbie Allen's 1999 book Brothers of the Knight and Deloris and Roslyn Jordan's 2000 work Salt in His Shoes: Michael Jordan in Pursuit of a Dream.

He exhibited his artwork at both New York's Society of Illustrators and Los Angeles' Museum of Tolerance.

He is the son of motivational speaker Emily-Diane Gunter.

Kadir Nelson Is A Member Of