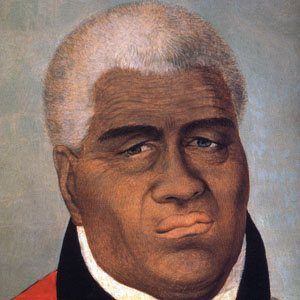 Remembered for conquering and unifying the Hawaiian islands and establishing the Kingdom of Hawaii in the early Nineteenth Century, this historical figure authored a human rights law known as the Kānāwai Māmalahoe and earned the title of Kamehameha the Great.

After the death of his noble uncle Kalaniʻōpuʻu, he became a high-ranking cleric and was granted a large parcel of land in the Waipiʻo valley.

He was born to nobles Keōua (father) and Kekuʻiapoiwa II (mother). He had eleven wives and seven children; his oldest son, Liholiho (Kamehameha II), was Hawaii's second king.

He and Victoria Kaiulani were both members of Hawaiian royalty.

Kamehameha I Is A Member Of