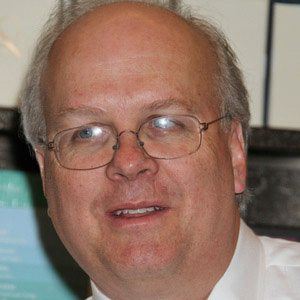 Deputy Chief of Staff during President George W. Bush's administration who was often referred to as 'the architect' of the administration's policies. After he left the White House he began to make frequent appearances on Fox News.

In 1970, he played a part in a prank wherein he broke into the office of Alan Dixon's, who was running for Treasurer in Illinois, and stole his letterhead.

He had a major role in George W. Bush's campaign, but he was involved in politics long before and even worked on some marketing during the Ronald Reagan Presidential campaign.

He married for a third time in 2012, to Karen Johnson; his prior two marriages ended in divorce. He has a son named Andrew.

He campaigned for Rick Perry in the early 1990's.

Karl Rove Is A Member Of