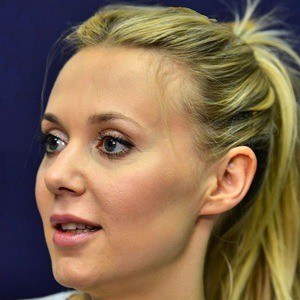 Singer-songwriter first known as a member of The Pussycat Dolls Burlesque Revue. She would later compete on Must Be the Music and would represent Poland in the 2017 Eurovision Song Contest.

She began her musical career working with ensembles like Stetsons and Big Band Lotharsi. Then, in 2002, she recorded her first demo.

In 2006, she competed in the Piosenka dla Europy in the hopes of representing Poland in the Eurovision Song Contest, however she placed tenth in the competition.

She is the daughter of Marek Moś, a member of the musical group Aukso. He is also a conductor for the Silesian String Quartet.

While performing with The Pussycat Dolls Burlesque Revue, she worked with celebrities like Kelly Osbourne and Carmen Electra.

Kasia Mos Is A Member Of