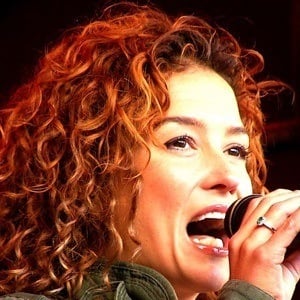 Prolific Dutch television star who first made a name for herself playing Jessica Harmsen on the long-running series Goede tijden, slechte tijden. She would later play prominent roles in the series S1ngle and All stars: De serie. She has also starred in feature films like Interview and Oysters at Nam Kee's.

She made her small screen debut in the 1992 television series Uit de school geklapt.

During the 1990s, she was joined by two other Goede tijden, slechte tijden actresses in the girl band Linda, Roos & Jessica. The group disbanded in 1999.

Her father is Dutch and her mother is Chinese-Surinamese from Curacao. She has a sister named Birgit Sarrap who is also a well known Dutch singer. She married actor Thijs Römer in 2006 and they had a daughter, Sammie, in 2010. They would divorce in 2015.

Her former Goede tijden, slechte tijden costar Georgina Verbaan joined her in the cast of the 2001 feature film Costa!

Katja Schuurman Is A Member Of