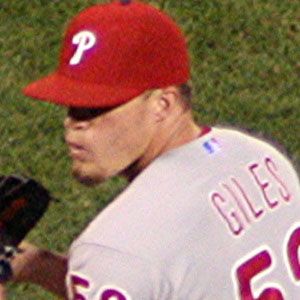 Pitcher who made his MLB debut with the Philadelphia Phillies during the 2014 season. He was traded to the Houston Astros in 2016 and he won a World Series title as a member of the team in 2017.

He was born in Albuquerque, New Mexico and was originally drafted out of Rio Grande High School in 2009 but elected to attend college instead.

He was drafted by the Phillies out of Yavapai College in the seventh round of the 2011 MLB Draft. He helped pitch a combined no-hitter against the Atlanta Braves in September 2014.

His older brother Josh was also a baseball player and won a National Championship at New Mexico Junior College.

He became teammates with starting pitcher Dallas Keuchel on the Astros.

Ken Giles Is A Member Of