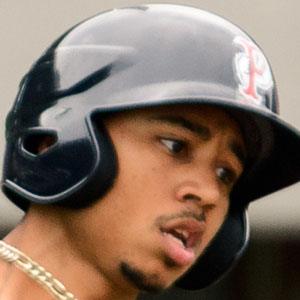 MLB outfielder who began his major league career with the Boston Red Sox in 2014 and made his first All-Star game in 2016. He was named AL MVP in 2018 and he helped the Red Sox win the 2018 World Series. In 2020, he was traded to the Los Angeles Dodgers and he went on to win a World Series title in his first year with the team.

His parents chose his full name, Markus Lynn Betts, intending that his initials would be "MLB."

He was born to Diana Benedict and Willie Betts. His uncle is 14-year MLB veteran Terry Shumpert.

He became teammates with second baseman Dustin Pedroia on the Red Sox.

Mookie Betts Is A Member Of