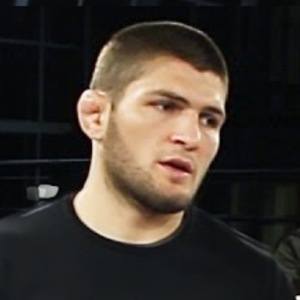 MMA fighter and UFC Lightweight Champion who is recognized for holding one of the longest undefeated streaks in the history of MMA with 29 consecutive wins. He became the first Muslim to win a UFC title. In October 2020, he retired from the sport after defeating Justin Gaethje at UFC 254.

His father began training him in wrestling at a very young age, he then went on to study judo. September of 2008 marked his debut in professional MMA fighting.

His father was famous wrestler Abdulmanap Nurmagomedov. He grew up with a younger brother named Abubakar who is also in the world of MMA. He and his wife married in 2013 and have a son and a daughter.

In October 2018, he defeated Conor McGregor via submission in the fourth round.

Khabib Nurmagomedov Is A Member Of