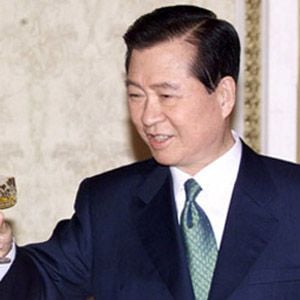 This Millennium Democratic Party politician held office from 1998 until 2003 as South Korea's eighth President. Remembered for his "Sunshine Policy," which sought to establish open communication with North Korea, he was awarded the 2000 Nobel Peace Prize.

After working for a shipping company during the years of Japanese control of Korea, he began his political career under the administration of Korea's first president, Syngman Rhee.

While temporarily banned from his native country for his opposition to the military dictatorship of Chun Doo-hwan, he lived in the United States and taught at Harvard University's Center for International Affairs.

He was born on the Japanese-controlled, South Korean island of Haui-do.

In late 1973, he was kidnapped by Korean Central Intelligence Agency officers for speaking out against the policies of dictator Park Chung-hee.

Kim Dae-jung Is A Member Of