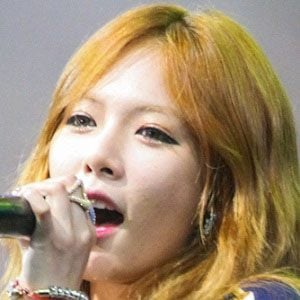 South Korean pop sensation best known as a former member of all-girl group 4Minute, which disbanded in 2016. She also performs in the duo Trouble Maker. In 2017, she was announced as a member of the trio Triple-H.

She graduated from the Korea High School of Music and Arts. Her first group was called Wonder Girls.

She was recognized for her cameo appearance in Psy's international hit music video, "Gangnam Style."

Her full name is Kim Hyun-ah. She has two younger sisters and is close with her mother. She has been in a relationship with Pentagon's E'Dawn since May 2016.

She was briefly a member of the Wonder Girls with Sunye Min.

Hyuna Is A Member Of