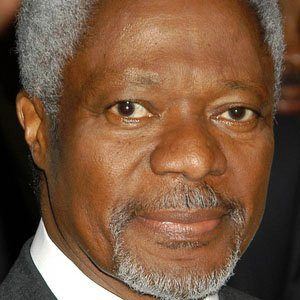 Ghanaian politician who served as the seventh Secretary-General of the United Nations from 1997 to 2006. He founded the Global AIDS and Health Fund and co-received the Nobel Peace Prize in 2001 for his work with the United Nations.

After studying economics at Kumasi College of Science and Technology in Ghana, he earned his masters at MIT.

His memoir, Interventions: A Life in War and Peace, was published in 2012.

He married Nane Annan in 1984 and he has three children. He is distantly related to Ghanaian footballer Anthony Annan.

He is a Nobel Prize laureate, much like President Barack Obama.

Kofi Annan Is A Member Of