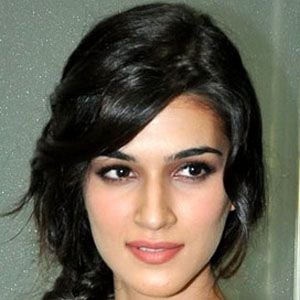 Known for her roles in such Bollywood and Telugu films as Heropanti and 1: Nenokkadine, this Indian celebrity has also had a successful career as a model.

She earned a bachelor's degree from the Jaypee Institute of Information Technology in Uttar Pradesh, India. She made her film debut in 2014, starring opposite Mahesh Babu in the commercially unsuccessful film 1: Nenokkadine.

In 2014, she was cast opposite Akshay Kumar in a Hindi film titled Singh Is Bling.

She grew up in New Delhi, India, as the daughter of Delhi University professor Geeta Sanon and accountant Rahul Sanon.

She and Tiger Shroff, both born in 1990, co-starred in the Sabbir Khan-directed movie Heropanti.

Kriti Sanon Is A Member Of