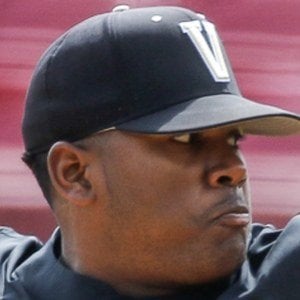 Professional Pitcher who was drafted tenth overall by the New York Mets during the 2021 Major League Baseball draft. While attending Vanderbilt University, he won an NCAA Championship and he won an award for being the College World Series Most Outstanding Player in 2019.

Prior to committing to play collegiate baseball at Vanderbilt, he attended North Oconee High School in Bogart, Georgia. While in high school, he played in the Under Armour All-America Baseball Game, the Perfect Game All-American Classic game, and for the USA Baseball U-18 National Team. Although he didn't sign, he was selected during the 38th round by the Colorado Rockies.

On June 8, 2019, he became the first collegiate pitcher ever to throw a no-hitter in the Super Regional round during the 2019 NCAA Division I Baseball Tournament during a 3-0 victory over Duke University. He recorded 19 strikeouts in the game.

He was born of Indian descent. His father, Tracy Rocker, was a professional Football player that played for the Washington Football Team.

He played alongside Jack Leiter as teammates at Vanderbilt University.

Kumar Rocker Is A Member Of