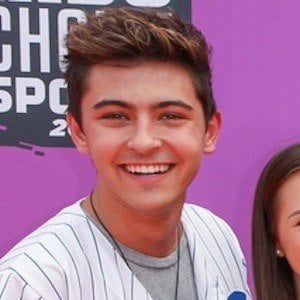 YouTube cover artist turned actor best known as Andrew on Nickelodeon's I Am Frankie. He initially gained fame for his acoustic cover of Wiz Khalifa's "See You Again," which features his sister Jada Facer.

He was fifteen years old when he posted a cover of Passenger's "Let Her Go" to his YouTube channel, his first video after creating his account in October of 2013.

Some bands that he has covered include One Direction and Little Mix. His channel has amassed over 210,000 subscribers.

His sister Jada is an actress, best known for playing Dani on the ABC Family series Melissa & Joey. He dated actress Tori Keeth.

He covered the Justin Bieber songs "Love Yourself" and "What Do You Mean?"

Kyson Facer Is A Member Of