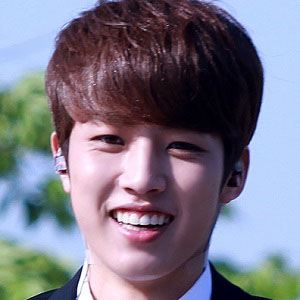 Singer best known by his stage name Sungyeol. He is a member of K-pop boy band Infinite. Infinite has won Mnet, Seoul, Golden Disc, Korean, and Melon Music Awards for their first two albums. He has earned over 1 million Twitter followers.

He and the other members of Infinite made their public debut in 2010 on the reality television program You Are My Oppa. Their debut EP, First Invasion, was released later that year.

An actor as well as a pop singer, he appeared in such KBS, MBC, and SBS series as Jolly Widows, Cheer up on Love, and While You Were Sleeping.

A native of Yongin, Gyeonggi province, South Korea, he grew up with a brother named Lee Dae Yeol. His aunt Yoon Yoo Sun had a successful career as an actress.

He and Kim Myung-soo (better known as L) both rose to fame as members of Infinite.

Lee Sung-yeol Is A Member Of