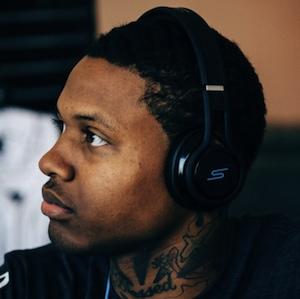 One of Def Jam's crop of Chicago rappers and leader of his own collective, OTF (Only the Family). His debut album, Remember My Name, peaked at #14 on the Billboard 200.

He self-released his first few mixtapes in 2011 when he started pursuing his music seriously.

His first single for Def Jam, "Dis Ain't What U Want," expressed his frustration with what he saw as the misplaced blame for Chicago's street violence.

He was born Durk Banks in the notoriously violent Englewood neighborhood of Chicago's South Side. His father, Dontay Banks, began a prison sentence for life in 1994. His brother Dontay Banks passed away in 2021. He began dating India Royale in 2017. They announced their engagement in December 2021. He has six children named Zayden, Angelo, Bella, Willow, Skyler and Du'mier.

Lil Durk Is A Member Of