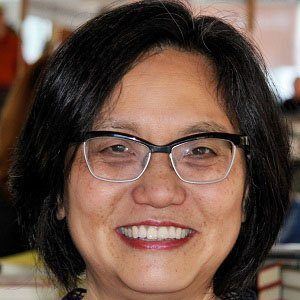 The author of young adult historical fiction novels and children's picture books, she is particularly notable for her Newbery Medal-winning novel A Single Shard (2001) and for her acclaimed books The Kite Fighters (2000), The Firekeeper's Son (2004), and Project Mulberry (2005).

She started writing at the age of four and had published her debut poem by the time she was nine. After graduating from Stanford University with a degree in English, she earned graduate degrees from both Trinity College, Dublin and the University of London.

She was a contestant in an October 2006 episode of the Alex Trebek-hosted game show Jeopardy!

The daughter of South Korean immigrants, she spent her youth in the vicinity of Chicago, Illinois. She later relocated to Rochester, New York, with her Irish-born husband and her children Anna and Sean.

She and fellow young adult author Rick Riordan both penned books in The 39 Clues adventure series.

Linda Sue Park Is A Member Of