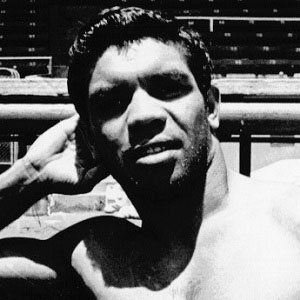 Australian bantamweight boxer who became the first Indigenous Australian to win a world title. He was the first person to win the Aboriginal Australian of the Year award and was an inaugural inductee into the Australian National Boxing Hall of Fame.

He grew up in Jacksons Track as well as the small town of Warragul. At age 15, he won the Australian amateur flyweight title.

His victory by decision over Chucho Castillo in front of a pro-Castillo crowd in Inglewood, California caused a riot, leaving 14 fans and referee Dick Young hospitalized.

He married a woman named Jenny, who was the daughter of his trainer, Frank Oates. His father, Roy, was also a boxer.

He had a brief singing career in the early 70's. His single "I Thank You," written and composed Johnny Young, was a huge hit.

Lionel Rose Is A Member Of