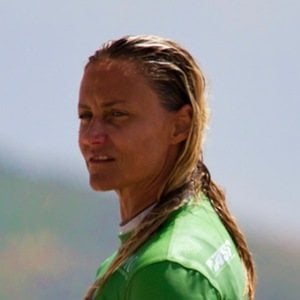 Multiple-time World Champion surfer who won four consecutive world titles from 1994 to 1997. She is a member of the Surfer's Hall of Fame and was named as one of the Top 100 Greatest Sportswomen of the Century by Sports Illustrated. In 2017 she announced that a film adaptation of her life story was in the works.

She was born in Ormond Beach, Florida and began surfing at age 13. She won the United States Amateur Championship in 1987 and turned professional the following year.

With her sponsor, Roxy, she designed the women's boardshort which became hugely fashionable among female surfers.

She married professional baseball player Tim Shannon in May 2008. She has children named Erika and Mason.

She and Layne Beachley are both multiple-time World Surfing Champions.

Lisa Andersen Is A Member Of