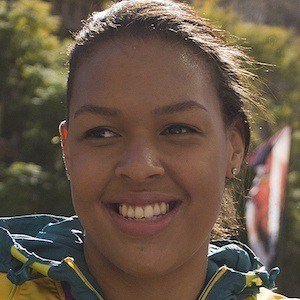 Professional Australian basketball player best recognized for playing with the Chinese team the Zhejiang Golden Bulls and with the Australian women's national team, the Australian Opals. She also played for the WNBA's Tulsa Shock.

She was six feet tall by the age of ten and was often teased for her height. Her mother suggested she begin playing basketball to make friends.

In 2012, she and the rest of the Australian national team took the bronze medal at the London Olympics.

Her father is Nigerian and her mother Australian. They separated when she was only three months old and she moved with her mother to Australia.

She played alongside Candice Wiggins in 2013 as a member of Tulsa Shock.

Liz Cambage Is A Member Of