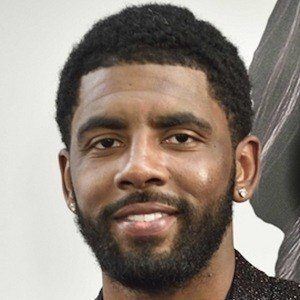 First overall pick of the Cleveland Cavaliers in 2011 who was named the NBA Rookie of the Year in 2012. He made his first NBA All-Star game appearance in 2013 and helped lead the Cavaliers to an NBA Championship in 2016. He played with the Boston Celtics from 2017 to 2019 before signing with the Brooklyn Nets.

He was a standout player at Duke, but a persistent foot injury kept him off the court for much of his one and only season.

He came to Cleveland a year after LeBron James left, which meant that he had very big shoes to fill. Luckily, James returned to Cleveland in 2014 and the two All-Stars became teammates. He writes, directs and stars in a series for Pepsi called Uncle Drew.

He was born in Australia to Elizabeth and Drederick Irving and he has a sister named Asia. He has a daughter named Azurie with ex-girlfriend Andrea Wilson. In 2017, he began dating Breanna Barksdale, but the two broke up the following year. He dated pop singer Kehlani in 2016.

He played at Duke under legendary coach Mike Krzyzewski and in his one season as a Blue Devil, the team was upset by Arizona in the NCAA tournament.

Kyrie Irving Is A Member Of