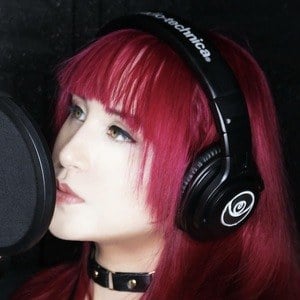 Professional vocalist and dancer who has sung for VOCALOID, Anime, Gaming, Disney and more. She makes original music as well, and has earned more than 310,000 subscribers for her YouTube channel. Her top video became "LittleJayneyCakes - Smoke and Mirrors - Cover by Lollia."

The first video on her YouTube channel was from April 11, 2013. It was called "D-Gray Man OST - Lala's Lullaby - A Capella Cover by Lollia."

On her Twitch channel lolliaofficial, she has streamed games such as The Sims 4, Final Fantasy XIV and Stardew Valley. She has also streamed live mini concerts.

She was born in Portland, Oregon.

Lizz Robinett was featured on her song and video "Vocaloid (minato) - Magnet - English Cover by Lollia."

Lollia Is A Member Of