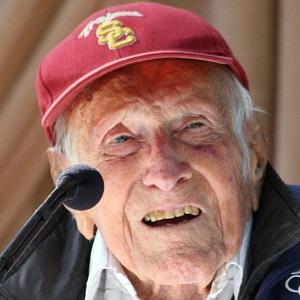 He finished 8th in the 5000 meter race at the 1936 Olympics in Berlin Germany. He then earned a Purple Heart medal after being held as a prisoner of war in Ofuna, Japan during World War II.

When he enrolled at Torrance High School in California, he barely spoke English and other students teased him. He then went on to attend the University of Southern California where he set a national college record for the mile, which he ran in 4 minutes and 8 seconds.

After his war career, he began a career as a Christian inspirational speaker.

He was born to Anthony Zamperini and Louise Dossi, a pair of Italian immigrants, and raised with a brother named Pete and two sisters named Virginia and Sylvia. He was married to Cynthia Applewhite from 1946 to 2001. He had children named Luke and Cissy.

Laura Hillenbrand wrote a book about his life and it was adapted into a 2014 film called Unbroken, directed by Angelina Jolie.

Louis Zamperini Is A Member Of