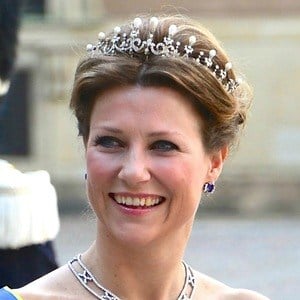 Famous as the Princess of Norway, and the fourth in line to the Norwegian throne, beginning in 2002. She is the older child of King Harald V of Norway and Queen Sonja, and has worked in Norway's entertainment industry.

She studied physiotherapy at university. She later interned in The Netherlands before moving towards the entertainment industry focusing on traditional Norwegian folk tales.

She has chaired the Princess Martha Louise Fund for the Norwegian government. She had her first book Why Kings and Queens Don't Wear Crowns published in 2004.

Her younger brother is Haakon Crown Prince of Norway.

She and Lisa Williams have maintained a close personal friendship.

Märtha Louise Is A Member Of