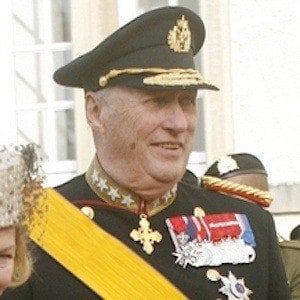 King of Norway who ascended to the throne after the death of his father in 1991. He is related to monarchs of Belgium and Denmark among others.

He was the first prince born in Norway in over six centuries.

As Norway's king, he was also head of its official church and the supreme commander of the military.

His marriage to Sonja Haraldsen in 1968, stirred much controversy because she was a commoner.

He was present at the oath of office ceremony of President-elect Franklin D. Roosevelt.

Harald V of Norway Is A Member Of