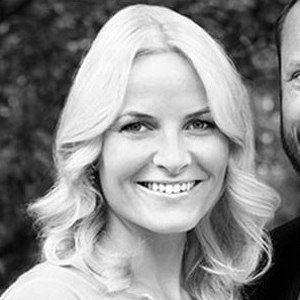 Crown Princess of Norway, heir apparent to the Norwegian throne, and wife of Crown Prince Haakon.

A commoner and a single mother, she met Prince Haakon at Quart Festival. The two would meet again a year later at another Quart Festival event.

Since her marriage, she has earned a master's degree in executive management and worked as a representative for UNAIDS. She has also presided over countless humanitarian organizations.

Her father, Sven Hoiby, was a journalist. She has a son named Marius from a previous relationship. She and Prince Haakon have two children, Princess Ingrid Alexandra and Prince Sverre Magnus.

Her father-in-law is Harald V of Norway. Like her own, Harald's marriage to Queen Sonja was also controversial due to the fact that she too was a commoner.

Mette-Marit Crown Princess of Norway Is A Member Of