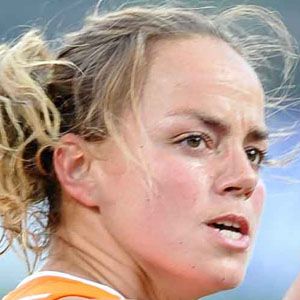 Field hockey player from the Netherlands known as one of the most decorated athletes in her sport, winning gold medals at the 2008 and 2012 Olympic Games. At the 2012 Games, she became the top goal-scorer in Olympic history.

She was born in Geleen and won the first of many Champions Trophy titles in 2004.

She has won a variety of championships as part of the Dutch national team and was named FIH Player of the Year two consecutive years in 2011 and 2012.

She has been in a relationship with fellow Dutch field hockey player Carlien Dirkse.

She and Argentina's Luciana Aymar are two of the most famous female field hockey players in the world.

Maartje Paumen Is A Member Of