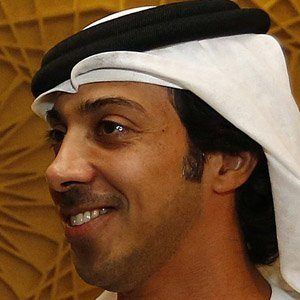 Deputy Prime Minister of the United Arab Emirates who also held an executive position on the Supreme Petroleum Council. He owned an investment business called the Abu Dhabi United Group.

After briefly attending Santa Barbara City College in California, he graduated from the United Arab Emirates University with a degree in international affairs.

In 2004, he became Minister of Presidential Affairs of the United Arab Emirates; around this time, he also chaired his country's First Gulf Bank.

He married Alia bint Mohammed bin Butti Al Hamed in the mid 1990s; they had a son named Zayed. He went on to marry Manal bint Mohammed bin Rashid Al Maktoum in 2005, they have two daughters named Fatima and Latifa and three sons: Mohammed, Hamdan and Rashid.

In 2013, he became an owner of the New York City FC along with Hank and Hal Steinbrenner.

Mansour Bin-zayed Al-nahyan Is A Member Of