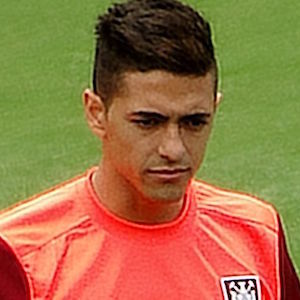 Professional soccer midfielder who's also known as "La Joya" (The Jewel). In 2014, he became the youngest foreign player to play in the UAE Arabian Gulf League at the age of 21.

He joined River Plate in Argentina when he was nine, and played with the senior club from 2010-2014.

He made four appearances for the Argentine U20 team in 2013. After joining West Ham on loan in 2015, he reached an agreement to sign with the team permanently in 2016.

He has an older brother named Tomás who's also played professional soccer. Although born in Argentina, he has an Italian passport.

He and Dimitri Payet became teammates when Lanzini was loaned to West Ham.

Manuel Lanzini Is A Member Of