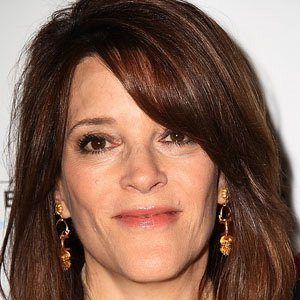 American author and lecturer whose work focuses on spirituality and self-improvement. Her published works include A Return to Love, A Woman's Worth, and The Gift of Change.

She enrolled in Pomona College in Claremont, California and worked as a teacher at the Unity Church. She later established a Los Angeles meals-on-wheels-program for AIDS patients called Project Angel Food.

She is the founder of The Peace Alliance, a campaign supporting the creation of a US Department of Peace.

She grew up in Houston, Texas. After living in California for many years, she relocated to her home state. A single parent, she has a daughter named India Emmaline.

She gained fame through appearing on The Oprah Winfrey Show.

Marianne Williamson Is A Member Of