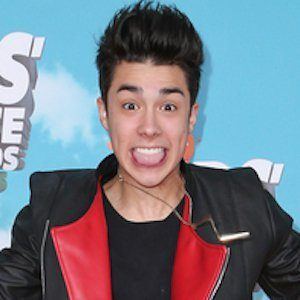 Mexican pop artist known for songs like "Baby Girl" and "Say Nothing." Before focusing on his music career, he gained popularity for his self-titled YouTube channel where he'd share short comedy sketches.

He started taking dance and vocal classes from a young age.

He was popular on the app Vine, where he posted videos with his friend and fellow Vine phenomenon Curtis Lepore. In 2016, he won an MTV MIAW for Digital Icon of the Year. He also won Favorite National Artist at the 2019 Kids' Choice Awards México.

His full name Mario Alberto Bautista Gil. His mother is Argentine singer Gloria Gil and her father's name is Carlos. He is the middle brother between Daniel Bautista and Jan Carlo Bautista. His cousin is famous Mexican pop singer Fey. He dated Brazilian model Bárbara Boller.

Mario Bautista Is A Member Of