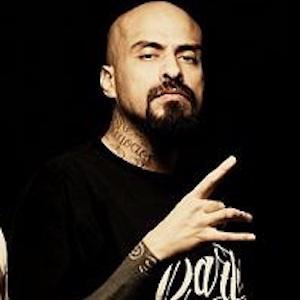 Rapper best known as the lead singer for the Mexican hip hop collective Cartel de Santa. In 2014, he released his 8th album, "Golpe Avisa," with the group.

He initially formed Cartel de Santa in 1997. He and his friends began by improvising rap songs, which led to a burgeoning interest in music as a viable career.

He and his bandmates first gained widespread recognition in 2003 for their debut self-titled album. It was produced by Jason Roberts, who had previously worked with famous artists such as Cypress Hill.

He was born and raised in Santa Catarina, Nuevo Leon, Mexico.

He is joined by Rowan Rabia in Cartel de Santa.

Babo Is A Member Of