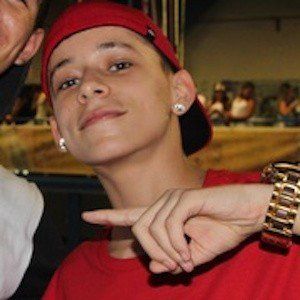 Brazilian singer who became a viral sensation with songs like "Dom Dom Dom," "Hit do Verao," and "Matematica." His songs have been the subject of much controversy in the Brazilian media due to their overt sexual references.

He got his start singing in a bazaar in Vila Maria in northern Sao Paulo, Brazil. His first hit single "Dom Dom Dom" was released when he was just 11 years old.

Prosecutor Luciano Tonet attempted to have Pedrinho's concert in the city of Fortaleza cancelled due to the profane content of the singer's songs.

His birth name is Pedro Maia. His mother, Analee Maia, has been supportive of his career. He has a sister named Giovana.

He has featured MC Livinho on songs such as "Se Prepara" and "Dom Dom Dom."

MC Pedrinho Is A Member Of