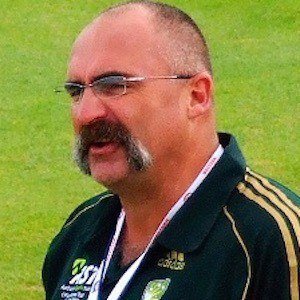 Former right-arm fast bowler nicknamed "Fruitfly" who represented Australia at the 1992 Cricket World Cup. He was a fan favorite for his boozing ways and large handlebar mustache.

He began playing district cricket for Footscray in 1978.

He portrayed Ivan Milat in the Australian 2003 film Fat Pizza.

He married Sue Hughes and he has two sons, Scott and Tim. His father was a schoolmaster.

He and Mike Whitney were both members of the Australian team which competed at the 1992 Cricket World Cup.

Merv Hughes Is A Member Of