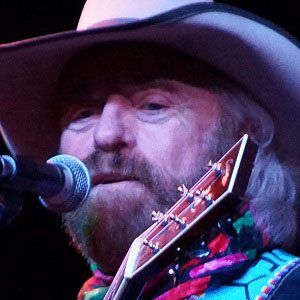 Known for his Gold-designated album Cowboy Songs and for his hit singles "Don't Count the Rainy Days," "What's Forever For," and "Wildfire," Murphey is also famous for writing the New Mexico state song "The Land of Enchantment."

While working toward an undergraduate degree in Greek at the University of North Texas, he became a member of the college's Folk Music Club. He later attended the University of California, Los Angeles, where he studied Medieval history and creative writing and continued writing and performing music.

A bluegrass musician as well as a country and western singer and songwriter, he recorded a 2009 album titled Buckaroo Blue Grass.

Born to Lois and Pink Murphey, he and his younger brother, Mark, spent their childhoods in Dallas, Texas. His first marriage to Diana Vero resulted in a Grammy-nominated musician son named Ryan Murphey. His second marriage to Caroline Hogue inspired his hit song "Carolina in the Pines," and his third marriage to fashion model Mary Maciukas produced children named Laura Lynn and Brennan. His fourth marriage to Karen Rische began in 2003.

Michael Martin Murphey Is A Member Of