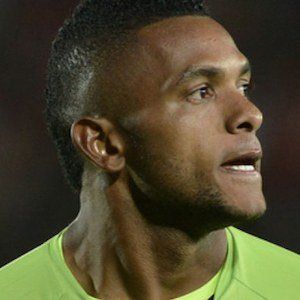 Forward for the Colombian national team who has spent the majority of club career playing for Cortulua, Sante Fe on loan, and Sociedade Esportiva Palmeiras.

He made his professional debut in 2011 with Deportivo Cali, and was transferred to Cucuta Deportivo that same year.

With the Colombia Under-20 national team, he won a South American Youth Championship in 2013.

He was born Miguel Ángel Borja Hernández in Tierralta, Colombia.

He was joined on the main Colombian international team with Yerry Mina.

Miguel Angel Borja Is A Member Of