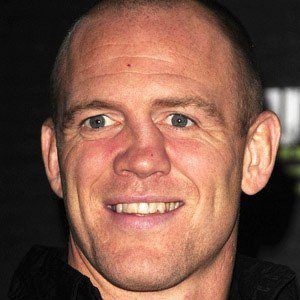 Former English rugby player who became known as an outside centre for Gloucester Rugby and Bath. He was also a member of the English national team from 2000 to 2011. He retired from professional rugby in 2014. In 2022, he appeared on the popular reality show I'm a Celebrity...Get Me Out of Here.

He joined his first professional rugby team when he was 18 years old.

He competed at the World Rugby Cup in 2011. He has garnered over 180,000 on Twitter, where he posts various sport-related content.

He married Zara Phillips, the daughter of Anne, Princess Royal, and the eldest granddaughter of Queen Elizabeth II and Prince Philip, Duke of Edinburgh. She and Tindall welcomed a daughter named Mia in January 2014. Their second daughter Lena was born in June 2018. In March 2021 they welcomed a baby boy named Lucas Philip Tindall.

He played alongside Jeremy Guscott on Bath.

Mike Tindall Is A Member Of