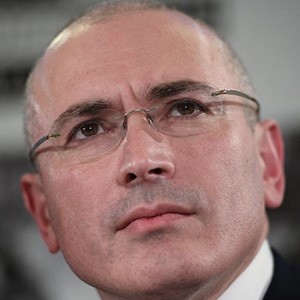 Businessman and philanthropist who, in 2003, was thought to be the richest man in Russia with a net worth of $15 billion. He acquired wealth by gaining control of several Siberian oil fields under the name Yukos.

He earned a degree in chemical engineering from the D. Mendeleev University of Chemical Technology in 1986.

In 2014, he re-launched his Open Russia initiatives to promote reforms to Russian civil society.

His parents Boris and Marina were engineers. He married his wife Inna in 1991. His daughter's name is Anastasia and his sons' names are Pavel, Ilya and Gleb.

He was arrested in 2003 and charged with fraud under the regime of President Vladimir Putin. In 2013, he was given a pardon.

Mikhail Khodorkovsky Is A Member Of