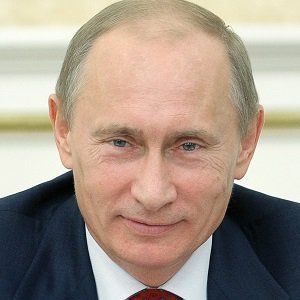 Authoritarian leader who has served three non-consecutive terms as the President of Russia since 2000. He has been accused of being a dictator and in 2014 he caused an international outcry when he invaded Ukraine in the midst of their revolution.

In 1975, he graduated from the Leningrad State University with a law degree before becoming an officer in the KGB, where he rose to the rank of Lieutenant Colonel during his 16 years of service.

He is credited with bringing political stability to Russia during his presidency as the Russian economy grew for eight straight years following his election to the presidency.

He is believed to be a descendent of Mikhail of Tver, the Grand Prince of Tver. He was married to Lyudmila Putina from 1983 to 2014, and he has two daughters named Maria and Katerina.

In 2000, he put great efforts to strengthening ties with Fidel Castro and Cuba.

Vladimir Putin Is A Member Of