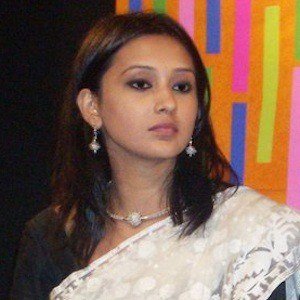 Indian actress who is famous for her roles in Bengali film and TV. She rose to prominence playing Pupe in the Star Jalsha serial Gaaner Oparey in 2010-2011. She subsequently turned to films, debuting in the Bengali romantic comedy Bapi Bari Jaa in 2012.

She graduated from Asutosh College with her degree in English. She participated in the Miss India competition before turning to acting.

In 2013, she won the 71st Annual BFJA Award for best promising actress for her work on Bapi Bari Jaa. She starred in the 2017 Bengali drama film Dhanajay.

Her parents' names are Arun and Tapashi.

She starred alongside Yash Dasgupta in the 2016 Bengali thriller film Gangster.

Mimi Chakraborty Is A Member Of