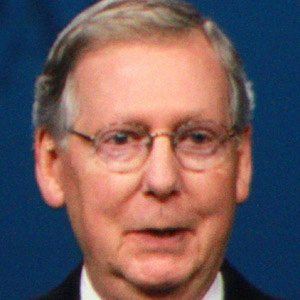 Republican Senator from Kentucky who became the Minority Leader of the Senate in 2007. He served as the Majority Whip from 2003 to 2007.

He graduated with honors from the University of Louisville and went to study law at Kentucky College of Law.

After starting his fifth term in Congress, he became the longest-serving U.S. Senator in Kentucky history. His full name is Addison Mitchell McConnell Jr.

He got married to Elaine L. Chao, who was Secretary of Labor under President George W. Bush.

He won his election to the Senate the same year Ronald Reagan was elected president.

Mitch McConnell Is A Member Of