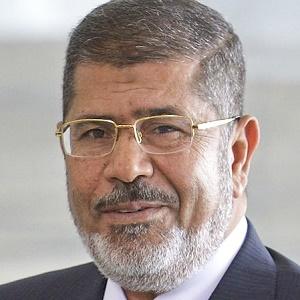 Egyptian politician who was swept into office as the 5th president of Egypt on the wave of the 'Arab Spring' revolts in 2012. However, he was unseated by a military coup council in 2013 and he was arrested on charges of incitement of murder and violence.

He was elected president after the former leader Hosni Mubarak was thrown out.

He became unpopular with his own people after he granted himself and his cabinet broad powers, ostensibly to protect the country.

He had five children with Naglaa Mahmoud, who rejected the 'First Lady of Egypt' title, preferring instead 'First Servant' or 'The President's Wife.'

He maintained friendly relations with Israeli president Shimon Peres, at a time when many of his people considered Israel an enemy.

Mohamed Morsi Is A Member Of