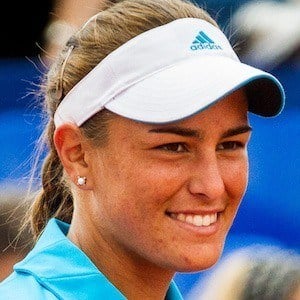 Olympic gold medalist who became known for her international career competing in the WTA tour and ITF circuit. She became the first athlete to win an Olympic gold medal while representing Puerto Rico at the 2016 Olympics.

She entered her first junior tournament in 2007, before having to withdraw. She enjoyed her breakout junior season in 2009.

She also became the first Latin American player to win the women's single tournament at the 2016 Summer Olympics.

She was born and raised in Hato Rey, San Juan, Puerto Rico to parents Jose and Astrid. She has a brother named Ricardo.

She has defeated Sara Errani, who was then ranked in the WTA's top 20 list.

Mónica Puig Is A Member Of