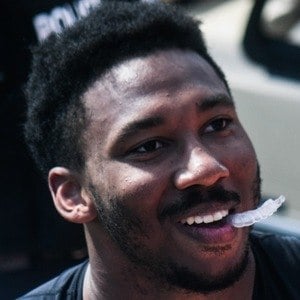 Defensive end whose stellar career at Texas A&M led to him being the first overall pick in the 2017 NFL Draft. In college, he was a unanimous All-American and received the Bill Willis Trophy as the top defensive lineman in the country.

He lettered in football, basketball and track at Martin High School in Arlington, Texas.

At Texas A&M, he broke Jadeveon Clowney's SEC freshman sack record in just 9 games. He finished the year with 11.5 sacks.

He is the brother of former NBA player Sean Williams. His sister, Brea Garrett, is a champion track & field athlete.

He was teammates with quarterback Trevor Knight at Texas A&M.

Myles Garrett Is A Member Of