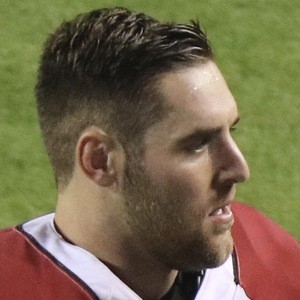 Quarterback who joined the Oklahoma Sooners in 2012 and became the team's starting quarterback the following season. In 2016, he transferred to Texas A&M University.

He was a dual-threat quarterback at Ronald Reagan High School in San Antonio, Texas.

He led the Sooners to an upset over the heavily-favored Alabama Crimson Tide in the 2014 Sugar Bowl and was named the game's Most Valuable Player. He set a Sugar Bowl record by completing 32 passes.

He has a twin brother named Connor who has also played for the Sooners and a younger brother named Tyler. He and cheerleader Lacey Munoz married in June 2020.

He and Landry Jones are both former starting quarterbacks at the University of Oklahoma.

Trevor Knight Is A Member Of